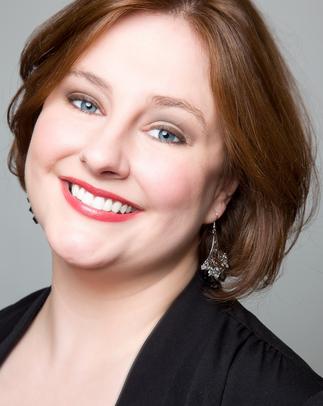 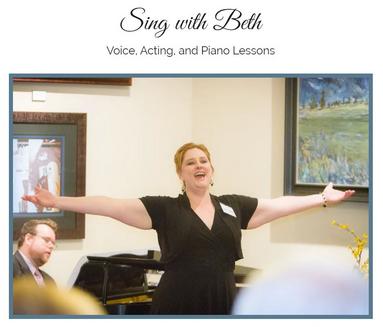 "Ms. Mitchell lights up the stage in Act III with a solo and a fabulous diva turn in a dress fit for Mardi Gras."​

In addition to performing, Elizabeth Mitchell has been teaching since the age of 15. Education is important to Elizabeth and she studied vocal pedagogy in both her undergraduate and graduate work. After graduation, she taught both piano and voice at the Novi Music Academy for 3 years and has now been teaching private voice and piano lessons for over 20 years.

Given her traditional academic background, Elizabeth specializes in classical vocal technique, but she also teaches musical theater, popular, and jazz styles in addition to beginning piano students and acting lessons. ​Her students are well rounded performers that arrive at their first rehearsal or audition totally prepared to hit the ground running. Find your voice with Elizabeth Mitchell! Lessons taught ONLINE and in-person in Belleville, Michigan.

ELIZABETH MITCHELL, Mezzo-Soprano, is a versatile performer whose repertoire ranges from opera to cabaret to art song.  A native of Salt Lake City, Utah, Elizabeth was blessed to be raised in a musical family and first discovered her passion for music as a pianist when she was 5 years old. By the age of 16, she changed her focus to singing and has never looked back.

Elizabeth is at home on stage. Professionally, she has performed nationally with Ohio Light Opera, Michigan Opera Theater, Utah Opera, Opera Western Reserve, Arbor Opera Theater, Michigan Philharmonic, Friends of the Opera of Michigan, Opera MODO, Comic Opera Guild, and Main Street Opera Theatre. In 2014, Elizabeth made her international debut as the Witch and Mother in Humperdinck's Hänsel und Gretel with Opera im Park in St. Anton am Arlberg, Austria. She returned in 2015 to sing the role of Dorabella in Mozart's Così fan tutte. In addition to these amazing roles, favorites include Suzuki in Madama Butterfly, Mrs. Grose in The Turn of the Screw, Mrs. Herring in Albert Herring, Ruth in The Pirates of Penzance, Marie in The Most Happy Fella, and Mistress Page in Nicolai’s The Merry Wives of Windsor. She can also be heard as Mrs. VanDare on Ohio Light Opera’s recording of The Firefly (Albany Records).

In 2014, Elizabeth began to sing with the Dodworth Saxhorn Band of Ann Arbor, Michigan. The Dodworth Saxhorn Band is America's premier 19th Century Brass Band focusing on music from the Civil War era. In addition to working as a soloist with the DSB, Ms. Mitchell is also part of the Dodworth Duo. With her fellow  artists Julie Craigo and Ted Badgerow, Elizabeth recently recorded the Duo's debut album A Thorn Among Roses (Vivo Productions) which was released in October, 2017. She has also nationally toured with the DSB and Duo entertaining audiences while also educating them about America's musical past through story and song.

In addition to her stage work, Elizabeth has competed in national and international competitions. In 2011, she was honored to be selected as a Utah District Finalist at the Metropolitan Opera Competition. Other awards include being an international finalist at the Lotte Lenya Competition for Singers in 2007 and a semi-finalist at the International Czech and Slovak Competition in both 2007 and 2009. She was also nominated as Best Supporting Actress in a Musical for the 2019 BroadwayWorld Detroit Regional Awards for her performance as Marmee in Little Women​ with One Off Productions.